What a strange creature, I thought, staring into a giant green eye. This monstrous giant loomed over my bowl… and I do say, that creature seemed hungry. I turned to Marion, with her bright gold body that lit up in the warm sun. “bluba, bluba, glub.” She stated.

I had forgotten Marion was an idiot. She swam next to the creature amongst our glass cage in a joyful fashion that made me groan. The creature seemed to agree as it admitted a low gurgling sound. “Marion, I do think you should get away from the edge of our confinement.” 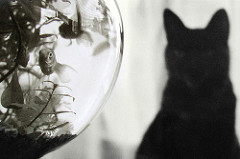 “Blub.” She responded. I retreated to my glorious castle where I swam in a circle and pooped. I wish the food god would descend upon us, I thought, staring wistfully at the exterior of my home. Suddenly, I heard a hideous, “glub!” I swam out of the door to see a massive paw with talons the size of my fin.

“Marion,” I screamed. As the monster, swept her against the sides of the bowl. I attempted to run to her, but the paw was back. The monster’s face was looming over the entrance and I began to worry that neither of us would make it out of this alive. Suddenly, thunderous earthquakes shook my bowl. I knew it was going to be the end, but when I looked up I saw the great one with the monster in its hands. He had saved me. But the same could not be said for Marion.

I swam up to her body floating listlessly upward. There was only a twinkle of life left in her eye. “Marion, I’m so sorry.”

“Glub, glub, blubba blub.” She uttered with her last bubble. To this day, that profound wisdom has shaken me to my core. Now the monster returns and watches me with a flick of its tail, but I know better than to wander out. I would heed Marion’s advice and I would live as long as the sunlight reached my bowl and the food rained plentiful.