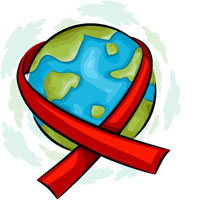 “I congratulate the children of Charlie’s Port on such productive and ambitious activity.”
Kathy Cox, Former Superintendent of Georgia Schools

“It is very impressive that a child can create such a movement.”
Shirley Franklin, Former Mayor of Atlanta

Eleven year-old Shannon Roux envisioned a cure for AIDS and relief for the children in Africa orphaned by the disease. Riverwood International Charter High School was home to several Charlie’s Port associates, so we convinced the high school to initiate a global movement on December 1st, 2008. Four hundred people donned red shirts and created a human ribbon on Riverwood’s football field to raise money for the Elton John AIDS Foundation.

Shannon and Charlie’s Port hopes one day that churches, synagogues, mosques, schools, and companies everywhere will demonstrate this activity on World AIDS Day and raise money for the EJAF.

“Clearly, Ms. Dunn [Branton] and her students understand the power of pooling together many small contributions to support an important cause.”
Scott Campbell, Executive Director, EJAF

Any group can participate! Sell or wear red t-shirts. Form a human ribbon in a public location on World AIDS Day. Collect donations and/or proceeds from your event. Send the proceeds and a picture of your human ribbon to the EJAF. Make checks payable to EJAF. Photos and proceeds should be mailed to:

“Clearly, Ms. Dunn and her students understand the power of pooling together many small contributions to support an important cause.”

“I congratulate the children of Charlie’s Port on such productive and ambitious activity.”