He twisted the box in his hands. It was heavy for such a small box. He looked at the plain black features with a gold rim. He put it in his pocket and smiled. “Where are you going, dear?” His mom asked from his kitchen. She always insisted on cooking when she came to visit and on cleaning up afterwards. He watched as she dried a plate with a towel and placed it in the cabinet. She was so pale it almost seemed like he could look through her.

“I need to visit Ella today!” He watched as his mom stopped moving her hand. He stood still until he saw her continue.

“Ah,” his mom said without looking at him. “Have a good time then.”

He left with a quick goodbye and headed towards the flower shop. The sky was bright and cloud free. He loved days like this. He walked into the quaint flower shop, it was small enough that the owner, Ernesto, knew him by name. The smell of fresh cut flowers floated to his nose

“James!” The man in his forties said in a jovial voice. He clasped his large hand on James’ back almost knocking him over. “What will it be today?”

He watched as the old man walked into the back to where James knew all the flowers were kept. “I need some tulips for Ella.” He looked at the black countertop and rubbed his hand down it. It was cold and smooth.

“Yes. You remember her, of course.”

The man came back in his black eyebrow raised slightly. “Yes, yes I do.” James looked at Ernesto. His eyes had many crinkles around them and he liked that.

“I need half a dozen tulips for her.” He pulled out the box. “It’s for a special occasion.” Ernesto turned away quickly and busied himself in the flower shop. He turned back around with the tulips. They were beautiful. Bright red.

“Here you go kid…” Ernesto said, not meeting his eyes.

“Thanks, Ernie! You’re the best.” He quickly left the shop. The air pushed him left, then right, then up two blocks, then to the right three more, till he finally arrived at his destination. He pushed open the gate and walked down the path until she stood before him.

“Ella.” He said. He dropped to one knee and placed the flowers at her feet. He looked at the rough grey marble in front of him. The harsh facade prevented him from seeing himself. He traced a finger over the letters of her name, ‘Ella Ray Thornburg.’ “I finally got the ring.” He said. He opened the box for the tombstone to see. 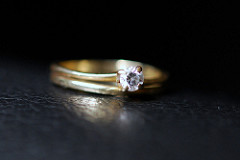 Inside was the ring he had worked two years for. He knew it was modest. The diamond was small but the band was clean and the fit was perfect. “I know it took a while, but I wanted to get you the one you wanted.” He closed the box and placed it in the soft dirt. The grass around the grave was just beginning to grow. He watched as a drop fell onto the dirt beside the box. He looked at the sky, but saw that it wasn’t raining.